Start of the RPG Adventure!

Like many people my age, I started playing the role-playing game Dungeons & Dragons when I was 13 years old. I remember it well. A group of older friends introduced me to AD&D in junior high school. My first character was a human ranger. Being a kid was great! Little to no responsibility, during the summers we would play all day and night. Our games of choice included Advanced Dungeons and Dragons, FASA’s Star Trek and TSR’s Top Secret.

Lucky for us, our parents didn’t mind us playing as long as it didn’t interfere with our school work. While at work my mom actually found out that adults in their mid-twenties were playing the same game. She thought it was impressive that her much-younger son would grok the same game that older adults were into. I know there was a stigma attached to D&D at the time. Not all parents appreciated it as much as my mom.

I eventually got away from gaming as I moved from one high school to another. Some of my social circles were not tabletop gamers, and so I kept my appreciation for my nerdy hobby in the closet. My late teens and most of my 20’s were rpg-less.

Starting Over, Taking It Further

Fast forward to the early 2000’s, I rediscovered my love of the hobby. A group of us, the friends that started gaming together in our teens, met at a local watering hole to wish a dear friend ‘good luck’ as he was leaving to join the Army. Our buddy Randy suggested that we should get the ‘band back together’ and game again. It had been over 20 years, but we gave it a shot. We re-started playing rpg’s, venturing forth with Dungeons and Dragons 3rd edition.

In 2003 I attended Gen Con. It was the first year in its new home in Indianapolis. I was surrounded by thirty-thousand people that shared the same love of role-playing games as I did. It was great. How could I meet more gamers and get to know their appreciation of their favorite games. Enter GrumblingDwarf.com. The Dwarf, as it is sometimes referred, was an online forum that would bring local gamers together and share their love of the hobby. I met a lot of good people from ‘the Dwarf’. Some of my long-term relationships came from meeting or interacting with people that visited The Dwarf.

While Dungeons & Dragons has always been a staple of gaming for me, it wasn’t long before I started a game group that decided to play the d20 Star Wars rpg. We used the Living Force campaign, one that spanned a couple of years.

In 2014 I ran into a local gamer, Brett, that worked at the same employer as myself. We would meet for lunch and talk about tabletop role-playing games. The two of us would go on to start the Gaming and BS RPG Podcast, a weekly audio show where we could take our lunchroom discussions and share them with other members of our gaming tribe. The show has been in production for over 7 years. 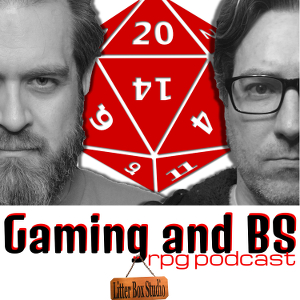 The Game Goes On

Most recently I started a Youtube channel dedicated to role-playing game subsystems. Example topics that I talk about on How to RPG includes how combat, initiative, chases, social interactions, magic systems, etc work in a specific role-playing game.

I attend GaryCon and Gamehole Con each year, play in a bi-weekly game.